In the evening of today's date in 1863 came a report that the main force of Union Gen. Rosecrans’s army was crossing the Tennessee River at points 22 and 32 miles southwest of Chattanooga. By September 4, large forces were in the Wills Valley, west of Lookout Mountain. Part of the army was reported to be moving south in the valley, and perhaps would cross the mountain at Winston’s Gap, 42 miles from Chattanooga, in an attempt to cut off the Confederate supply line from Atlanta. Confederate Gen. Patrick Cleburne, commander of Great Grandfather Oakes's division, advises Gen. Braxton Bragg that he should attack and crush the enemy corps facing him, but Bragg does not agree.

In an effort to clear up some apparent confusion about why one of his regiments, Col. Lowrey’s 32nd in which Great Grandfather Nathan Oakes is serving, had been ordered to send one of its companies north of the Hiwassee River to guard the steamer Holston, Cleburne decided to visit the regiment in person. He sent a dispatch to his commander, Lieut. Gen. D.H. Hill, indicating that he will leave that morning to visit Lowrey's position at Blythe’s Ferry. In his absence, Cleburne leaves S.A.M. Wood, Great Grandfather's brigade commander, in charge of division headquarters.

Having chased Gen. Braxton Bragg's troops from Middle Tennessee a few weeks earlier, on today's date in 1863, Union Gen. William Rosecrans of the Army of the Cumberland opened a new campaign, one to take Chattanooga from Bragg.*

Col. John T. Wilder's "Lightning Brigade," which had been so successful earlier at the Battle of Liberty Gap, was observed by the Confederates marching northeast of Chattanooga. It was part of Rosecrans's ruse to trick Bragg into thinking his army would cross the Tennessee River near there. Wilder had been sent on the 20th to reconnoiter from Harrison's Landing to Chattanooga. Part of his deception included having his men make a lot of construction racket to simulate the building of rafts. Wilder's men then threw the lumber into the river to float downstream into Confederate-held territory. It was enough to reinforce Bragg's expectations of a Union attack on Chattanooga from that direction.

Around 9 AM on the 21st, along the Tennessee River opposite Chattanooga, Wilder ordered his artillery to begin shelling the town. The attack caught many soldiers and civilians at the Presbyterian church observing a day of prayer and fasting for the Confederacy. Shells killed and wounded women and children attending the service. The bombardment also sank 2 steamers docked at the landing and created great anxiety among the Confederates. The soldiers were forced to evacuate the town and reposition beyond the range of the enemy artillery.

On the day of the attack on Chattanooga, a worship service was planned in the 32nd Mississippi Infantry Regiment along the banks of the river. According to Capt. Daniel Coleman, the service had to be canceled when Federal troops were spotted in several areas. On the north bank of the river at Blythe's Ferry, Col. Lowrey, commanding my great grandfather's 32nd Mississippi, sent a dispatch from his defensive position there to Brig. Gen. H.D. Clayton: “The enemy have appeared on the opposite shore, in what force I cannot tell.” Gen. Clayton left for Blythe's Ferry for an assessment of the situation. He reported,

“[T]he enemy appeared on the opposite [side of the river at Blythe's Ferry] at 1 o’clock, and requesting that I would hasten on. I had previously sent Colonel Lowrey word that I was coming. I subsequently received information that the enemy had left and that there was no necessity of hurrying. Learning that there was no drinking-water near the river, I halted my command at this place, and taking with me a section of artillery went to see Colonel Lowrey.

Clayton reported that the next day, in addition to leaving a section of artillery with Lowery's Regiment, that there was a battalion of sharpshooters with Lowrey, too. Nearby were 2 other regiments and another section of artillery. In Clayton's opinion, Lowrey's position at Blythe’s Ferry was "perfectly secure; the rifle pits for about 600 men are very superior, and the bluff on this side high enough to command the opposite [side of the river]...” Meantime, Gen. Cleburne was ordered to move the rest of his division at Tyner's Station to positions covering every ford along the river, from the mouth of Chickamauga to Lowrey's position at Blythe's Ferry. Capt. Coleman wrote that for several days afterword, Federal troops were spotted across the river, which kept the Confederates there on alert.

But Bragg's attention was focused upriver, so he sent troops in the wrong direction. His orders to his commanders on today's date indicate that he was fooled by Rosecrans's deception, convinced that the enemy's action was the start of a major Union thrust. His problem was that he really didn't know where the Army of the Cumberland was, nor where Rosecrans may cross his army over the river. Bragg decides to wait for developments before taking further action, and to fall on the enemy in force when he knows from where the main attack will come.

At midnight, Bragg ordered the civilians out of Chattanooga. Federals continued to shell the town periodically over the next 2 weeks, keeping Bragg's attention to the northeast, while the bulk of Rosecrans's army crossed the Tennessee River well west and south of the city. When Bragg learns on September 8 that the Union army was in force across the river southwest of Chattanooga, he will abandon the town.

So far, Rosecrans's strategy is going according to plan.

Email ThisBlogThis!Share to TwitterShare to FacebookShare to Pinterest
Labels: Chattanooga

On today's date in 1863, my great grandfather, Nathan R. Oakes, a private in the Confederate Army of Tennessee, turned 18 years of age. Having enlisted in March 1862, Pvt. Oakes served in the 32nd Mississippi Infantry Regiment under Col. Mark P. Lowrey, in Patrick R. Cleburne's Division. To date he has seen action at Perryville, Murfreesboro, and Tullahoma. Within a month he will be in the midst of severe fighting on the Chickamauga battlefield.

Today though, Great Grandfather Oakes is stationed with his regiment at Blythe’s Ferry on the Tennessee River, building defensive entrenchments and digging rifle pits. The nervous troops are being observed by enemy cavalry scouts from the opposite side of the river.

Also on this date in 1863, Federals began firing on Chattanooga. Thirty miles upriver the enemy has also appeared across from Cleburne's Division. To counter the Federal movement, Gen. Cleburne distributed his remaining troops at Tyner's Station to guard every crossing from the mouth of the Chickamauga, 2 miles above Chattanooga, to Blythe's Ferry. Various units of his division along the river will engage the enemy in skirmishes over the next few days. Everyone expects that major fighting will start soon.

Rosecrans begins his advance on Bragg

While Confederate Gen. Braxton Bragg anticipated a Union advance on his position at Chattanooga, he readied his army in the belief that Rosecrans will take the northern route, crossing the Tennessee River north of the town. Expecting an attack from this direction, Bragg prepared for a protracted defense of Chattanooga to hold Rosecrans's advance for months if necessary, at least until reinforcements arrived for a decisive battle.

But Rosecrans prepared another plan that included a much more hazardous but faster route over the Cumberland Mountains, crossing the Tennessee much farther south. He sent 1 corps to feint north of Chattanooga. He assigned his other 3 corps to cross the Tennessee River west and south, across the ranges of Sand and Lookout Mountains, to threaten Bragg's railroad supply line southward. Rosecrans's bold plan to trap Bragg required his army to carry everything it would need for up to 25 days of fighting, if it came to that. Amazingly, he would accomplish his movement without Bragg figuring out what he was up to.

On today's date, a Sunday in 1863, Rosecrans started out over the Cumberland Mountains to cross the Tennessee River. If he is successful, his army will take Chattanooga, the gateway to East Tennessee and Northern Georgia, and either destroy Bragg's army or force him to retreat into Georgia. He's off to a good start, as Bragg is entirely unaware of his enemy's approach.

Sources: The Army of the Cumberland, Henry Martyn Cist; This Terrible Sound, Peter Cozens
Posted by Mark Dolan at 9:30 AM No comments:

On today's date in 1863, division commander Gen. Cleburne learned that Federal troops from Col. R.H.G. Minty's First Brigade, Second Calvary Division, had been spotted on the right bank of the Tennessee at Bridgeport, 24 miles southwest of Chattanooga, near the mouth of the Hiwasse River. He at once dispatched Great Grandfather Oakes's 32nd Mississippi Regiment, which began its march on August 1 from Tyner's Station to guard the crossing at Blythe’s Ferry. The new position was 31 miles northeast of Chattanooga, where the Hiwassee enters the Tennessee River. The regiment arrived there about noon on the 4th, where it will remain on station here throughout the month.

In his account, Minty reported Lowrey's defensive position there:

The river between here [Smith’s Cross-Roads] and Kingston is strongly guarded. At Blythe’s and Doughty’s Ferries intrenchments have been thrown up, but I think the guns have been removed within the last couple of days; the force at Blythe’s Ferry is the [32nd & 45th] Mississippi, under Colonel Lowrey.

Col. Minty notes again, that the 32nd & 45th Regiments are still in position at Blythe’s Ferry on the August 4th when the 5th Confederate arrives. 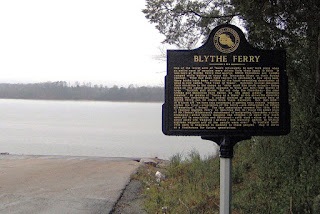 Probably unknown to most soldiers at time, Blythe (or Blythe's) Ferry, 25 years earlier, was the location where Cherokee Indians assembled and then moved across the river on a forced relocation march to Oklahoma. It was the infamous "Indian Removal Act of 1830" that rounded up the Cherokees and removed them from their ancestral lands in southeastern states. Their "Trail of Tears" crossed the river at this point. The ferry no longer exists, but the site is now part of the Cherokee Removal Memorial Park, dedicated in 2005. It is listed in the National Register of Historical Places. Blythe Ferry was established by William Blythe and, ironically, his Cherokee wife, Nancy Fields, around 1809. Blythe sold the ferry in 1825.