Robert E. Lee, Stonewall Jackson, Leonidas Polk. Many of the Confederacy’s great generals and and other officers were also outstanding men of faith. Add to this list the leader of my great grandfather’s regiment, Col. Mark Perrin Lowrey, later promoted to Brigadier General following his brave and decisive leadership at the Battle of Chickamauga.

Born to English and Irish emigrants, Lowrey was ordained a Baptist minister before serving in the Mexican War. He was well known in northern Mississippi, having pastored several churches there, including one in my great grandfather’s hometown of Kossuth where Lowrey also lived. That he was a man of high esteem is evidenced in the fact that early in 1861, he led a regiment of Mississippi state militia in the campaign into Tennessee and Kentucky. After it was disbanded, Lowrey was urged to organize, another regiment for the Confederacy—largely from the same men—the 32nd Mississippi Infantry, of which he was elected Colonel, unanimously.

He was a heroic fighter on battlefields like Chickamauga, Ringgold Gap, and Pickett's Mill, yet I prefer to think of Lowrey as a Christian, who was also a warrior. Becoming a commissioned officer in the Confederate army didn’t hinder him from shepherding the flock of soldiers under his command. It is well documented that Lowrey frequently preached to his men and helped many convert to the Christian faith. He participated in the now famous Revival of the Southern Army, preaching before crowds in Tullanoma, Tennessee and again at Dalton, Georgia, where my great grandfather was present. An autobiographer wrote of "the fighting parson of the Army of Tennessee," that "Throughout the war... General Lowrey never laid aside his responsibility as an ambassador of Christ, and often preached in camp."* Even the stress of the battlefield would not deter him from his calling as a minister. In his brief autobiography Lowrey wrote, “While our division was in camp at Jonesboro, Ga., the 16th of September 1864, having been set apart by the President as a day of fasting and prayer, on that day I preached to a large congregation of soldiers from this text: “Call upon me in the day of trouble; I will deliver thee and thou shalt glorify me" (Psalm 50:15).

Is it any wonder that one chronicler summarized Lowrey's character this way: "General Lowrey was greatly loved and implicitly trusted by his men, who felt that he had their interests at heart and who knew that he himself was always willing to go where he commended them to go." 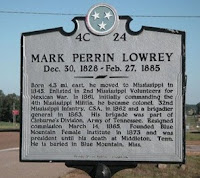 Surviving the war, Lowrey returned to Mississippi and took up the task of reorganizing and rebuilding churches that had been destroyed during the conflict. Eventually, he formed a Christian women’s college, which still exists as the Blue Mountain College (3 generations of Lowreys became presidents of the college). He was elected president of the Mississippi Baptist Convention, serving from 1868-1877. Following years of teaching at the college, Lowrey became quite ill, and in 1882 his doctors informed him that his heart was very weak. He died suddenly 3 years later.


* One old soldier recalled that Lowrey would "preach like hell on Sunday and fight like the devil all the week!" A more noble compliment was made by Gen. William J. Hardee after the war when he wrote that Lowrey was "the parson soldier, who preached to his men in camp and fought with them in the field with equal earnestness and effect."