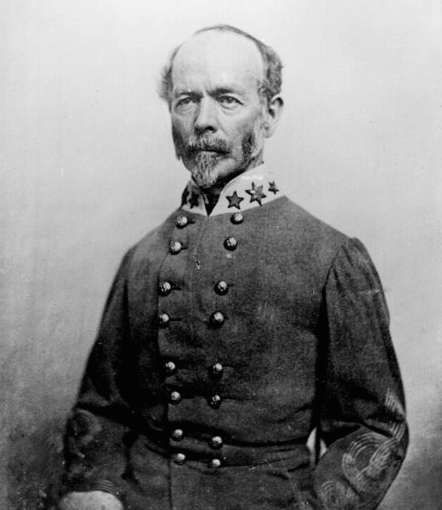 On today's date in 1863, retired Gen. Joseph E. Johnston received a telegraph from Richmond ordering him to report to Gen. Robert E. Lee, the Confederacy's new general-in-chief. On the same day, Lee also telegraphed Johnston directing him to "assume command of the Army of Tennessee and all troops in the Department of South Carolina, Georgia, and Florida." The purpose of the order was simple: "Concentrate all available forces and drive back Sherman."

Johnston immediately made his way to Charlotte to assume command from Gen. P.G.T. Beauregard, whose health prevented him from continuing as commander-in-chief. In turn, Beauregard accepted Johnston's offer to be second in command and to assist with the concentration of available Confederate forces.

Upon assuming his new role, Johnston reported to Lee that his force totaled less than 25,000, nearly 10,000 fewer troops than Beauregard had estimated his strength to be earlier in the month. And with these he would attempt to hold back Sherman's 60,000-man army. To complicate matters, the men and units that Johnston could bring against Sherman were scattered and had yet to fight together as a united army. Before he could adequately oppose Sherman, Johnston needed to concentrate his force.

Lt. Gen. William Hardee with his command of about 11,000 was on his way from Charleston to Cheraw. Maj. Gen. Benjamin F. Cheatham and Lt. Gen. Alexander P. Stewart were moving the remnants of the Army of Tennessee to concentrate their forces at Fayetteville and would soon be joined there by Hardee's army. Facing Sherman was Lt. Gen. Stephen D. Lee with about 3,000 other veterans from the remainder of the army of Tennessee along with 6,000 cavalry under Wade Hampton. Braxton Bragg led 5,500 troops which had been forced to retreat from Wilmington.

Johnston moved his headquarters to Fayetteville, North Carolina, on March 4, to better supervise the movements of his troops now gathering in his direction. Moving again to Smithfield on March 10, he was greeted enthusiastically by troops of the Army of Tennessee, which had finally competed their long and arduous trek from Mississippi. Now with a united army, Johnston will oversee the fighting leading up to Bentonville before being compeled to surrender to Sherman at Bennett Place in April.

From Augusta to Bentonville, 1865

On February 9, 1865, my great grandfather Nathan Oakes finally arrived at Augusta, Georgia, completing an arduous 2-week, 500-mile trip from Tupelo, Mississippi. His regiment, the 32nd Mississippi Infantry, had been ordered with Benjamin Cheatham's Corps to confront Union Gen. William T. Sherman and his army that was heading out on a path of destruction through the Carolinas.

After a few days respite, the corps was ordered north from Augusta to defend Columbia. However, on the march, the Confederates learned that Sherman had gotten ahead of Cheatham and had attacked Columbia. So Cheatham was ordered to Newberry instead, about 40 miles northwest of the capital city. Crossing the Saluda River on the 17th, the tired men completed their march to Newberry on today's date. There Cheatham awaited further orders from Gen. P.G.T. Beauregard as to where he planned to concentrate the scattered forces making their way north.

Cheatham's men were ordered to march to Charlotte on February 21st. However, when they reached the Enoroee River that night, 21 miles north, a change of orders came from Beauregard. The next morning, the troops marched back to Newberry. From Newberry on the 23rd, they loaded onto rail cars and rode 17 miles south to Pomaria. Due to a break in the rail line, the corps stayed in Pomaria through the 25th.

During their short stay there, Gen. Joseph E. Johnston was appointed to take command of Beauregard's army. The new commander's orders were to concentrate his forces and drive back Sherman. Johnston chose Smithfield, North Carolina as the new cncentration point for his scattered army.

From February 26th through March 6th, Cheatham's Corps made a difficult march to Chester, South Carolina. From there on March 11th, the weary troops took railroad cars toward Smithfield. The train ride was anything but uneventful, however.

Leaving Chester on the 11th, the men traveled 45 miles to Charlotte, North Carolina, arriving there very late that night. The next morning, a Sunday, they continued by rail 45 miles north to Salisbury, arriving in the late afternoon. Here the rail gauge changed, so the corps had to wait for the arrival of a new train. They waited a whole week.

Finally on Monday, March 20, they reached the Smithfield Depot. After unloading the train, the men camped along the tracks. Unfortunately for them, the fighting that would become the Battle of Bentonville had just started. So, the morning of the 21st, Gen. Cheatham set a grueling pace, marching his men from the Smithfield station to join the second day of the final battle of the Carolinas Campaign.

Source: Official Records, Vol. 47, Pt. 1; Last Stand in the Carolinas, Mark L. Bradley
Posted by Mark Dolan at 5:30 AM No comments: Links to this post

The Battle of Columbia, South Carolina

In a meeting with his generals on February 2, 1865, Gen. P.G.T. Beauregard decided to defend South Carolina against Maj. Gen. William T. Sherman's 60,000-man army by dividing his force. He had only half Sherman's strength to hold the key cities of Augusta and Charleston. On today's date in 1865, his strategy proved to be the wrong one for keeping Sherman out of the state.

While threatening both cities, Sherman managed to move the 2 columns of his army between the Confederate's western and eastern commands and head for the state capital. When he reached the outskirts of Columbia on today's date, he found the city to be defended by an inferior Confederate force, mostly cavalry under Gen. Joseph Wheeler and Maj. Gen. Matthew C. Butler, along with a portion of Stephen D. Lee's infantry corps of the Army of Tennessee.

By the next day, Columbia had fallen to Sherman's army. Upon their retreat, Confederate cavalrymen set cotton bales on fire. Drunken Federal soldiers added to the conflagration by setting the town ablaze.

Sherman had now cut off the port city of Charleston from the interior of the state, which in turn forced the evacuation of the garrison there under Gen. William J. Hardee. Hardee’s troops withdrew to Cheraw, near the North Carolina border, and then to Fayetteville where Beauregard hoped to unite his forces and make a stand against Sherman. The Confederates essentially were giving up South Carolina, the first state to secede and where the first shots of the war had been fired.

During the Battle of Columbia, Great Grandfather Nathan Oakes was marching with his 32nd Regiment in Benjamin Cheatham's Corps toward that city. Having only recently arrived in Augusta, Georgia, completing a torturous 500-mile trip from Northern Mississippi, Gen. Beauregard ordered Cheatham's Corps on to Columbia on the 13th.

Learning along the way on the 17th that Sherman's army had gotten between it and Columbia, Cheatham's Corps was ordered to Newberry, about 40 miles northwest of the capital city. That night, the troops were across the Saluda River, and the next day they arrived at Frog Level Station (Prosperity) on the Greenville Railroad. On the morning of the 19th, they marched 8 miles to Newberry, there to await further orders from Beauregard as to where he planned to concentrate his scattered army.

On today's date in 1865, Gen. P.G.T. Beauregard called his generals together at Green's Cut Station, near Augusta, for a war council to determine how to stop Maj. Gen. William T. Sherman's 60,000-man army moving out of Savannah, about 125 miles to the south. In addition to Beauregard, Lt. Gen. William Hardee, Lt. Gen. Daniel H. Hill, and Maj. Gen. Gustavus W. Smith were in attendance, each commanding one of the separate Confederate forces in the region.

Beauregard estimated his combined strength at 33,450 troops. However, his estimate included 10,000 reinforcements he expected to receive from Mississippi with the arrival of the survivors of the Army of Tennessee. These western troops would reach the state at various times over the next 10 days, and included: Maj. Gen. S.D. Lee's Corps of around 4,000, which had mostly arrived in Augusta by this date; Maj. Gen. Benjamin Cheatham's Corps, among which was my Great Grandfather Nathan Oakes, not anticipated until the 5th; and Maj. Gen. A.P. Stewart's men who would not arrive until the 11th.

Beauregard decided against concentrating his forces. Instead he settled on a strategy of dividing his command to hold both Charleston and Augusta as long as possible while peace talks were taking place in Hampton Roads, Virginia.* He planned to eventually reunite his forces at Columbia.

Beauregard's decision proved a fateful one for his armies.

Sherman launched his Carolinas Campaign on February 1st from Savannah, dividing his army into 2 columns in a feint towards both Charleston and Augusta. Cutting a swath more than 40 miles wide, he successfully pushed his force between the divided Confederate armies and captured Columbia by the 17th.

Failing to halt Sherman, the Confederates were forced to give up the state and withdraw toward North Carolina.

* The Hampton Roads Conference was held between the United States and the Confederate States on February 3, 1865. The conference took place aboard the steamboat River Queen in Hampton Roads, Virginia. The goal was to discuss terms to end the war. USA President Abraham Lincoln and his Secretary of State, William H. Seward, met with CSA commissioners, Vice President Alexander H. Stevens, Senator Robert M.T. Hunter, and Assistant Secretary of War John A. Campbell. Sadly, a peace agreement was not reached, and the war continued well into April.